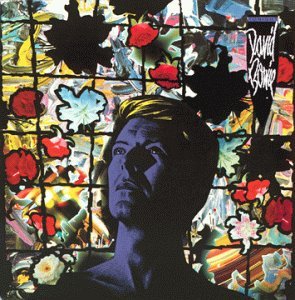 Now for me this is contentious. Obviously you can tell from my list
that Tonight is NOT my least favourite Bowie album. This statement
alone would see me kicked out of the David Bowie Puritan’s fan club
(if such a thing exits?)! I’m the first to admit feeling a little
cringe at Bowie’s eagerness to go all ‘commercial’ in the 1980s. Such
a pioneer in the 70s, ‘selling out’! How could he?!

But there is something I like about Tonight. I certainly don’t like
ALL the tracks on the album and it’s not on REGULAR rotation –
although I play it more often than perhaps I should admit to – but it
has a little place in my heart. I think I got the album fairly early
on in my fandom. It was still ‘ten a penny’ to purchase in the late
1980s. I eventually ended up with a Rykodisc copy which has the added
(and only, some may say) bonus of having This Is Not America, Absolute
Beginners and As The world Falls Down (a track from the Labyrinth
soundtrack – maybe perhaps THIS track not so much a bonus) tracks on
it.

After All these years I still haven’t tired of Loving The Alien. It’s
weirdly political for a Bowie song. He doesn’t normally ‘do’ political
– well not intentionally anyway. And obviously there’s a theological
theme to it to. Templars, knights, saracens, Christians…all
mentioned. Sounds sort of like a song about the Crusades. But it’s all
mildly funkified. So it’s sort of juxtiposed: heavy lyrics, funky
song. And the end of the music video makes me jump STILL to this day –
I’m NEVER ready!

On reflection and with hindsight Don’t Look Down isn’t that good. I
still can’t help but sing along when it’s playing but it’s another 80s
Bowie desecration of an Iggy Pop song. He was determined to do that
this decade

The desecration continues with God Only Knows. In all honesty I had
NEVER heard the Beach Boys version before I heard Bowie’s (I know!) –
I didn’t even know it was a cover at first! It IS awful. Instead of it
being an appraisal of someone when the Beach Boys do it, Bowie turns
it into a lament and makes it sad.

And so we continue down ‘Desolation Rows’ (the Bowie fans amongst you
should get the reference). Here Bowie gets Tina Turner to help him
slaughter Tonight. Iggy’s version is a MASTERPIECE! That lament read
out at the beginning – WOW! You’ve taken a song about a drugs overdose
and turned it into a merry little singalong. NNNNOOOO!!!

And now to change tack. I actually prefer the Bowie version of
Neighborhood Threat. Musically at least it sounds more ‘ballsy’. A
harder drum beat. I like it.

You can’t not like Blue Jean – and it was EVERYWHERE at the time! I
remember him being on Hey Hey It’s Saturday (I think) doing that live
link-up thingy and of course the video is of Thriller proportions
(well, in length at least)!

I LOVE Tumble and Twirl. It’s my guilty pleasure. I really shouldn’t,
I know. Kick me out of the Bowie Puritan Society if you must – but
there, I’ve said it. I LOVE TUMBLE AND TWIRL! And I love I Keep
Forgettin’ too – but I have never heard the original so he MAY be
desecrating that too…

Dancing With The Big Boys? Meh…doesn’t do anything for me. I
normally skip it.

As for the bonus tracks…This Is Not America is a masterpiece. It was
the sole reason I wanted the Rykodisc copy. Possibly his best
collaboration with anyone, anytime. See! Bowie COULD do good in the
80s! Lol. I have a soft spot for Absolute Beginnings too. And the
bonus is the FULL 8 minute experience. As for When The World Falls
Down – I only ever listen to the song when I watch Labyrinth. I’d have
preferred Underground, sadly.

It’s amazing to find that of the album itself (bonus tracks not
included) Bowie writes just Loving The Alien and Blue Jean by himself
– all other songs are co-written or are covers.

I still like it and give it the odd listen (perhaps skipping one or
two (three?) tracks). It’s not Let’s Dance (thank f*ck for that – the
puritans say – because they also HATE Let’s Dance) but it has a place
in my heart.