The very first time I heard it, I fell in love with it. It’s Mick MacNeil’s organ playing (I’m assuming it’s an organ, it sounds like one) that first hooked me in. It is SO reminiscent of “Waltzinblack” by The Stranglers (another absolute FAVE instrumental – oddly enough, The Stranglers are the Minds’ support/co headliners for the November European and UK area gigs) but Garden Of Hate pre-dates it. Did Dave Greenfield hear Garden Of Hate and get ideas? That’s a nice thought!
Charlie Burchill’s guitar is actually quite hard rock on this. Guitar rock waltz!

It’s a curiosity for a Simple Minds track in that it’s OVERTLY dark. I love that! I love a band that can do “dark” convincingly. And their music had a darker edge to it in the early days…but this is something else! And I think that is why I was SSOO blown away by it when I first heard it. When you grow up only knowing or being familiar with “the hits”, you tend not to associate this kind of dark material with Simple Minds.
In his lyrics, Jim talks about seeing a man with a broken arm and a girl he knows getting “quite cut up” and that he either doesn’t care or doesn’t know *if* he cares. That’s some pretty dark apathy going on there. Of course, it’s story-telling, but wow!
It’s kind of weirdly “rocky” too, helped along by Charlie’s grinding guitar…but with that waltz timing to it…Mick’s organ (that sounds wrong saying it like that!) dictates the whole song though, really

.
It ends with a fantastic crescendo. Jim and the rest of the bhoys singing the title of the song over and over, between exaggerated laughs of “HAHA HAHAHAHA!” from Jim. And then that final note of Mick’s that seems to go on forever…
It’s a fantastic Halloween song. Hence why I chose to write this particular “why I love…” now. Just so I had an excuse to share Garden Of Hate for Halloween.
And that is why I love Garden Of Hate.

(Lol…the home made video though…what is has to do with Istanbul or trains, I dunno?)

It’s the rhythm of it to begin with. Very reminiscent of David Bowie’s Station To Station. It reminds me of it, but is far enough removed not to sound a pastiche. Charlie’s guitar fade at the end is SSOO much like the beginning of Station To Station. Charlie does a pretty “Slick” nod to it (Bowie aficionados *may* pick up what I did there!).

A great bassline once again from “Big Dan”. And Charlie uses the guitar effects for a nice screeching sound. Maybe it’s just reverb. I can’t claim to understand what I hear, but I know I like it!

Absolutely one of the best set of lyrics Jim has ever written. They are very image laced. I see the pictures in my head when he sings them “I see a land, as we crawl by night /I see a face on the window in front” – I love those lines so much! And possibly my favourite lines from ANY SM song…ever “these stations are useful / these stations we love them” when it wasn’t very “de rigueur” to claim to “love” things like that. I’m assuming because of such, Jim is very much saying it tongue-in-cheek, which I love. (No pun intended!)

The demo version has different lyrics. He sounds like he’s ad libbing a bit. The song’s musical structure is there…and some of the final lyrics are there (including the “these stations” ones) but there are some lines that don’t gel. He did a wonderful job refining and trimming. The demo versions can make you appreciate the final cut so much more…

And, of course, the song ends with the sound of a train.

It just does a great job of letting you feel that train journey experience. Foreign lands…people behaving shifty…cloak and dagger…it’s like Strangers On A Train. Simple Minds do Hitchcock and borrow a *tiny* bit from Bowie and do a stellar job.

And that is why I love Constantinople Line. 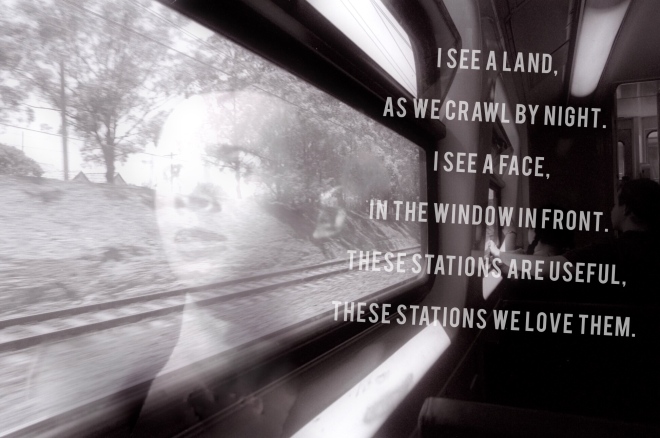 Music, Movie, TV and Pop Culture News for the Mainstream and Underground