I’ve spent the last 24 hours using a different version of Linux on my netbook that runs “live” from an SD card. It’s a version of Ubuntu for netbooks called Easy Peasy. It’s more meant for the EEEPC, but seems to be working just as well for my netbook.

I sometimes get a little tired of the “kiddie” interface of the Aspire One OS, which is based on Linpus and does look a bit candy store.

It starts up like lightening, but adding software (even with an IT pro at your side) can be a bit of a bum. The first thing I loved about the Ubuntu version was fab games! I’m easily pleased!! lol I like the look if it. The desktop is still not conventional, but at least it doesn’t look like it’s aimed at a 8 year old. 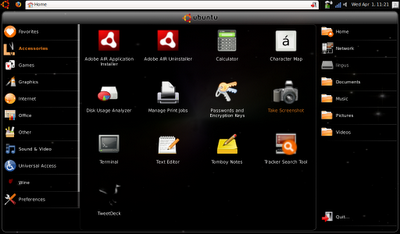 The other part I initially liked was being able to install Adobe Air and use TweetDeck for twitter, thinking that I’d LOVE to use TweetDeck, as everyone else seems to use it. But I don’t really get on with that. I’ve got Spotify installed on here, and I can see thing attached to Wine in a clearer way too. Pros and cons, pros and cons. Takes a while for the desktop to be up and running and it’s changed my keyboard around slightly, so my quotation makes are where my @ symbol is, and vice versa. Will just take a little brain retrain. It’s not on permanently yet and I will make sure I give it some more testing before I decide to install fully. I’ll keep you informed. Update: 10pm I’ve installed it fully on the system. Had a few little teething probs. After it seemingly being the same, my keyboard (since doing some system updates) has been sorted and my @ and “‘s are in the right place again. Installed Spotify again, but was getting digital interference/cut-outs, which was making me think “uh oh! Maybe I rushed the install”. But all it required was a small change to the Wine audio settings. A click there and an unclick there and it was sorted, and the sound is now crystal. So far, so good. I’m really getting into Easy Peasy version Ubuntu.
For more info check the Easy Peasy wiki page by clicking here.